Exactly seventy posts ago I talked about the Myerrs-Briggs Personality Test, what it means, and how it works. I’ll put a link to the post at the bottom if you have no idea what I’m referring to, but today I want to revisit it a little bit, talking less about its function and more about what use it could be in real world scenarios.

In my experience, its easier to get along with people that you are similar to. Sounds obvious, sure, but with this specifically, I mean that from all of the people whose personality types I know, I only get along with people with whom I share at least two of the four letters. My personality is INTJ, which in essence means that I admittedly think I’m better than everyone else and I pride myself on efficiency and accuracy while generally enjoying my distance from others. I get along with pretty much everyone in my family, and I wasn’t surprised when I learned that all of their sixteen types share at least two letters with mine.

Of all of the people I enjoy spending time with, I share at least two letters. It probably isn’t that hard to believe, especially when you involve statistics. Odds are most people are bound to share one or two letters with me, but an interesting thing that I’ve noticed is that the number of letters I share with people is directly proportionate to how well I get along with them. My mother and I share three letters, and I get along extremely well with her. Even the things we disagree on I can respect what she says. I only personally know one other INTJ, and my relationship with him as actually pretty unusual. When we spend time together, most often we get into philosophical discussions and debates where we pose questions to each other and explain our thought processes. When we talk about games or movies, we talk about the elements in those things and why we like them. We are distinctly different people, sure, but I think nurture is the largest factor in that. Our thoughts and expectations of other people are so similar its actually kind of weird to have somebody I relate to so well! 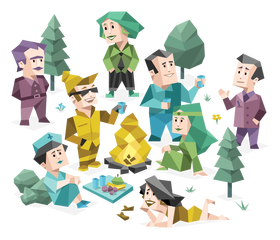 I think its upsetting that so few people are aware of this test. It’s a great tool that can tell you a lot about yourself and those around you. In fact, I don’t use Reddit very often, but one of the pages I frequent is the INTJ subreddit, where quite a few people ask questions and share jokes and stuff. I’m sure every personality type has a similar subreddit, so I want you to take the test (if you don’t already know where you fall under) and look up the subreddit! It can be a lot of fun to look at a community forum where all the people are so much like you. You may actually be surprised at how closely people resemble your own personality.

And as a side note now that I think about it, using this website might be a great way to help me establish my characters. Maybe I could define my characters as having specific personality types and then research those types to get a better idea of who they are. Definitely something worth trying!