Alright. I’m reviewing this game because, while it’s been some time since I’ve played it extensively, it deserves my articulated thoughts. In fact, I actually thought I had reviewed it. Dungeon of the Endless reminded me of the game in terms of music, and I brought it up in my review of that game. I intended to put a link to my FTL review on that post, only to find that I had no FTL review to link. So here it is. Plus, now’s a good time, because their newest game, Into the Breach just came out, and buying it gives you a free copy of this game, too.

What is Faster Than Light? Simply put, it’s a rogue-like strategy game where you’re piloting a spaceship escaping from the evil Rebel fleet. There are two core aspects to the game: Game dialogue and combat. Game dialogue consists of what is probably a majority of the game. You jump to a star, and a text box opens up telling you what’s going on at this star. It’ll say something like “A pirate ship is attacking a civilian cargo ship! What do you do?” (paraphrasing here), and you can choose to attack the pirates or ignore it. (There might also be a third option to attack the civilians, too, it’s hard to remember the specifics of each event.) If you choose to attack the ship, a combat will happen. They might surrender and give you items, and you can accept or refuse it. If you kill them, the civilians will thank you, and you can still choose to steal from them. Basically, this game is largely dictated by choice.

Not everything happens the same way every time. Choices you make can help or hinder you pretty much regardless, because the repercussions of them are also randomly generated. (It’s worth noting that it’s not all random. Playing over and over again will give you knowledge of what can happen and how likely events are to be good or bad). This basically allows the game to be infinitely replayable, because if each choice always yielded the same result, you could just look it up on a wiki and win every time (as long as you weren’t bad at combat). As a side note, the combat is the only thing in the game that is real-time, but you can pause as often as you like while issuing commands to your units and guns, so if you’re bad at doing things quick, don’t worry about it.

Is the game good? Well, let me start by saying it’s hard. I’m pretty sure I’ve only beaten the final boss once. I’m not positive because my computer blue-screened while I was playing it today and deleted all my stats. (My unlocked ships are still fine, strangely enough). But it also has three difficulties, and of the dozens of playthroughs I’ve tried, I’ve beaten it once. On easy. Maybe I’m just really bad, but it is certainly not a walk in the park.

I love rogue-like games, and the single most important thing about it is replayability. FTL has a bunch of different ways to play, because there are lots of different kinds of weapons, races, ships, etc. The idea is once you beat the game with one method, you should try a different method. I’ve found that the Halberd Beam is just easy-mode. 3 Damage per room it and you can hit five or six rooms per shot? That’s insane!

Another thing this game does right is the music. Not only does it have a different soundtrack for each alien-controlled sector you’re flying in, but it also has a combat layer that seamlessly adds onto the music currently playing once you enter a combat (usually this means drums or other more percussive tools). It’s beautifully done.

So, this game does require reading. Not a lot, but you can’t just make choices willy-nilly until you start seeing the same events repeat themselves, and even then going too fast can mess you up big time. Overall, anyone who likes small, casual strategy-related games will love Faster Than Light. And though I haven’t played it yet, you’ll probably also like their new game, Into the Breach, as well. 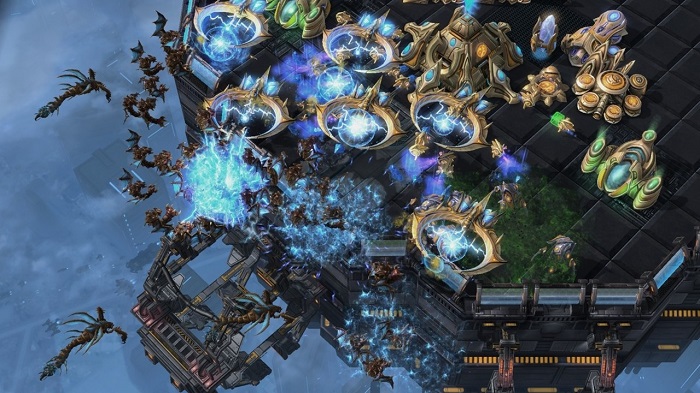 Back in the day, my brothers played a lot of Starcraft: Brood War. I was a little young at the time, but when Starcraft II: Wings of Liberty was announced, it was perfect. Finally I could get into a series my brothers really liked without having to go back and play old games! (I played a very little bit of Diablo II with them prior to the sequel, but not enough to really remember anything.)

So Starcraft II was my first (and admittedly pretty much only) experience with real time strategy gaming. Now, I for one love strategy. I’m a huge fan of getting thrown puzzles by way of combat and resource management, but let me tell you, I generally do not like real time stuff outside of MMORPG and FPS games, but I couldn’t really tell you why. I’d like to say it’s because I get nervous when confronted with quick time actions, but I don’t think that’s really the reason. While I tend to avoid PvP in RPG games, I’d say the real reason is because I hate feeling as though I can never improve satisfactorily. But this is a tangent, so let’s say I’ll talk more about this in a me post later and then completely forget that I said this at all like usual.

Long story short, I played Starcraft a lot, but not competitively because I’m really bad. I went through the story, got as many achievements as I could, and played all of the fan-made arcade games that didn’t require actual skill at the game. I also played against the computer a lot.

But enough about me. Starcraft is an amazing game. It’s simple to learn, but requires literally thousands of hours of practice to start getting “good” at it. If you know what to look for, the world championship is incredible. The game requires a lot of thought, but at the same time playing competitively encompasses all skill levels really well.

It also has infinite replayability. Of the three races you can play, there are so many different strategies and playstyles that you can sit there and practice the same one over and over, refining it to learn how best to adjust towards other strategies, or you can just mess around and see which one you like.

I would say Starcraft is probably the biggest RTS out there. I’ve been told that in South Korea it’s practically a major sport (which to me I translate that knowledge to mean there is like a Starcraft channel on TV. Which would be awesome.) This game has a huge following, and there’s so much history behind it that it’s difficult for me to even wrap my head around. You could very easily spend an entire week watching videos, strategy guides, and streams around extremely specific aspects of this game.

The thing that I don’t like about this game in particular is the micro management. Players that are really good can keep track of several groups of troops, handle the production of four and five bases, and adapt to their opponent’s tactics all at the same time. My mind simply doesn’t work fast enough to be able to concern myself with more than one army and one base, so seeing the pro gamers do it flawlessly is just fascinating to watch.

So if this is the sort of game that sounds interesting to you, and it has somehow eluded your attention all this time, I’d recommend just looking up some stuff on YouTube. Maybe watch one of the championship matches. Just keep in mind that you shouldn’t hold yourself to that standard. Don’t get intimidated by what masters can do!