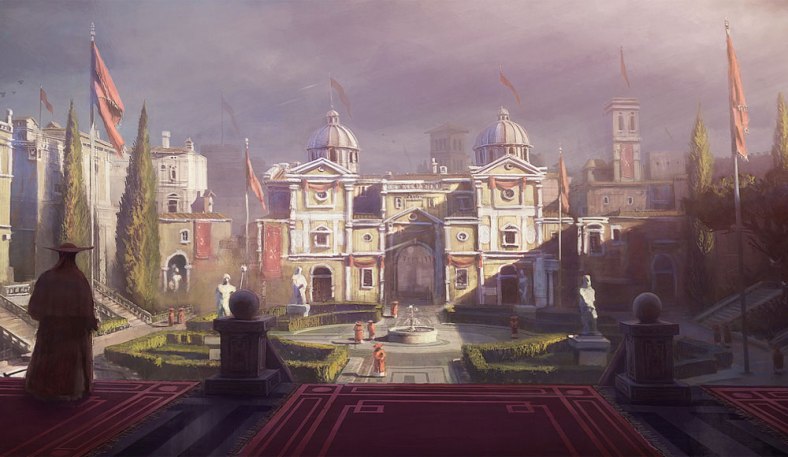 Varra preferred this dining hall because it was on the first floor, and had no inner wall, which gave it a pleasant view of the inner courtyard in the center of the palace. As uneasy as the obelisk in the courtyard made her, it was easier to bear in the daylight, and it felt better to have it within line of sight. Besides, this hall was just as lavish as the one upstairs, but it was rarely used, especially in the morning, and she enjoyed the peace and quiet.

“Good morning, Exalted One,” an older man smiled at Varra as he approached her table. She knew his face well. Elodrus, the Hand of Ceremony. “Mind if I join you?”

“Not at all,” she lied, gesturing to the seat opposite her with a small cup of tea in her other hand. She wore no armor now, instead opting for a simple tunic and breeches that contrasted against the extravagant nature of everything around here. “Though I’m afraid I won’t be much good for conversation. I didn’t get much sleep last night.”

“So I heard,” he replied. “Rogue constructor running rampant in the Meadows, only to disappear when you go looking for it. I’m sure that’s given you no small amount of concern.”

“To be entirely honest, the constructor is the least of my worries at the moment.”

Elodrus tugged at his beard a little. “You’re referring to the boy you found?”

“He’s a piece of the puzzle, nothing more.”

“I’m curious as to the reason you decided to bring him to Xan,” he pondered. “Bandits sneaking into the city should hardly be granted free entry, don’t you agree?”

Her guards had been the only ones to see the boy’s staff erupt into flame, and she had sworn them to secrecy. They didn’t know about the rune hidden within it, nor would they know it’s purpose if they did. But Elodrus would, so it was best kept under wraps for now. “I wanted to question him about what happened. How he avoided the constructor for so long.”

“You won’t get anything out of him. A wounded and scared captive rarely says anything of use.”

A servant walked by, and upon Varra’s request, she refilled her tea. Elodrus sent for some water, and within moments it was retrieved for him.

“I’ll let the Hand of Justice handle that part,” Varra continued. “After he recuperates, that is. Xan says his condition is more related to illness than injury, in any case.”

“You’re being quite soft towards him. He’s a criminal, Varra. He’s committed sacrilege by venturing out at night, and he tried to gain access to Upper Terrace illegally. People have been hanged for much less than that.”

“There will be time to hang him after we learn his motives.”

“No, he isn’t, Elodrus. None of it makes sense. There’s too much going on for this to have been a coincidence.”

The Hand of Ceremony sighed. “You think this is related to the Gate.”

Varra glanced out into the courtyard.

The bronze-colored obelisk reflected a soft, dull light towards the two of them as it loomed over the hedges and flowers around it. It was thin and tall, in the shape of a large spear that pointed directly up towards the heavens. Or, more accurately, towards the sister planet.

“Varra, won’t you let this go? This is nonsense.”

She shook her head. “I don’t intend to, no. When I became a Hand and was told what that obelisk really was, I lost my ability to sleep soundly. I wake up in the middle of the night with the curtains thrown back, when I know I closed them before I went to sleep. It’s constantly watching me, Elodrus. And if my worst fears come true, Terrace would be wiped out in the blink of an eye. The constructors would be powerless. You can’t tell me you’re not concerned, too.”

Elodrus frowned as he followed her gaze. “I suppose not,” he agreed. “But we can’t simply recall all of our forces.”

“We can. I’m the Hand of Defense. I don’t need the other Hands’ approval.”

“No, but historically it’s been safer for the city when we act in unison and cooperation.”

Varra set her cup down. “I’m going to bring it up in the meeting today.”

“The others won’t like that,” Elodrus said. “We have more important matters to discuss.”

“Somehow I doubt that. We’ll talk later.” And with that, she walked out of the dining hall, leaving Elodrus alone to ponder the circumstances and the Spear Gate in the courtyard.