You know, the Review portion of this blog is pretty much meant to get me to watch, read, or play something new every week. Ideally it would be me talking about “the new thing I did this week”, but I’m really bad at that. The most recent movie I watched was a month ago for a film class, but it was a very political movie and I don’t like getting into politics.

So, instead, let’s talk about the best movie ever made: Count of Monte Cristo. (The 2002 film. There may or may not be other feature length films of the same title.)

I’ll start with the qualification that, as a rule, I don’t like re-experiencing things. Very often, it feels like a waste of time. I don’t want to reread the same story, watch the same movie, or play the same game when there’s an unquantifiable amount of things to experience. My life is one of productivity and efficiency, which is contrary to that whole idea.

Count of Monte Cristo is a rare exception in my world because I feel like I’m watching a different movie every time. I’ve probably seen it half a dozen times by now, and with every new viewing I catch things I hadn’t noticed that re-contextualize character motivations. This movie is a masterpiece in a lot of ways, though as always, I do still have a few gripes. Spoilers ahead, though, so if you haven’t seen it yet, it’s a classic.

Before I get into my nitpicks, let me provide some context (if you haven’t seen the movie and don’t care about spoilers). It would be an injustice for me to attempt to explain the plot in just a paragraph or two, but I’ll try anyway. Our hero, Edmond Dantes, is a simple and poor young man is given a lucky break and promoted to Captain of the merchant ship he works on. Powerful people around him are consumed with varying levels of jealousy, contempt, and fear, and Edmond, though apparently innocent, gets thrown into a high security prison, and his family is told that he died. Years go by, he breaks out, finds riches and then the last third of the movie is basically an elaborate scheme as he exacts revenge on everyone who wronged him.

As I already touched on, this movie does an amazing job at establishing depth. Everyone who betrayed him had different reasons for doing so, and all were compelling and believable. Jealousy seems simple until you see that it comes from a rich man coveting the happiness his poor friend has. Even lesser characters have very clear and understandable wants, which is no small feat. Nobody in this movie is a plot device, not even Napoleon Bonaparte, who was basically written in to be a plot device, as he is only in the first few scenes of the movie. I will say though, this comes at a cost. With how much subtle context and layering everything has, you won’t catch everything if you only see it the one time. Points off for that, but as long as you’re not confused as to the main plot, it’s more or less fine.

But what astounds me the most about this movie is that it isn’t really structured like most stories. The entire last third of the movie is the main character just getting what he wants. There’s a climax, yes, but it isn’t really filled with conflict. When he is given everything, you are no longer watching to see if Edmond will get his revenge, you’re merely watching to see what the revenge turns out to be. It doesn’t contain nearly as much suspense, and nothing to the degree of the chase scene as he resists arrest and is betrayed by a friend, or when he hatches his plan to escape from the Chateau D’if.

I would compare it to a torture film, actually, where all the people are getting their just desserts. Only, in this movie, the torturer is our main character and is doing it in the name of justice, and it feels great. In all my years of schooling and whatnot, I myself still cannot wrap my head around the exact reason this movie works. Maybe I just need to watch more soap operas. (Not that Count of Monte Cristo is overly dramatic, it’s just… opulent.)

So, nitpicks. As I said, the amount of layers it has does sort of detract from it for me. I honestly did not love it the first time I saw it. A good film, to be sure, but it probably wasn’t my all-time favorite movie until I had seen it three or four times. I mean, Edmond has plotted his revenge meticulously for years. But when he’s going through with his plans, you won’t catch the nuances of how and why the first time, because at no point does he tell the audience “first, I’m going to kidnap his daughter and frame his uncle for murder etc etc”. No, you just know he has plans and then watch as they unfold.

Also, I didn’t realize I had this problem until writing this, but Luigi Vampa, the Captain of the pirate ship Edmond becomes a crew member of after he finds himself a free man, isn’t in the movie enough. JB Blanc does an amazing job with his character, and it’s a shame he’s only a minor part. It isn’t often I see a gentleman thief character done to my satisfaction.

Overall, the best movie. Solid period piece, even if it isn’t 100% faithful to history, awesome character development, good subtly, and a really interesting plot progression. Also Henry Cavill is in it.

(P.S. to prove how many layers of character depth this story has, here’s a character sheet, though I think it’s from the book, not the movie. So simplify it by like 15%.) 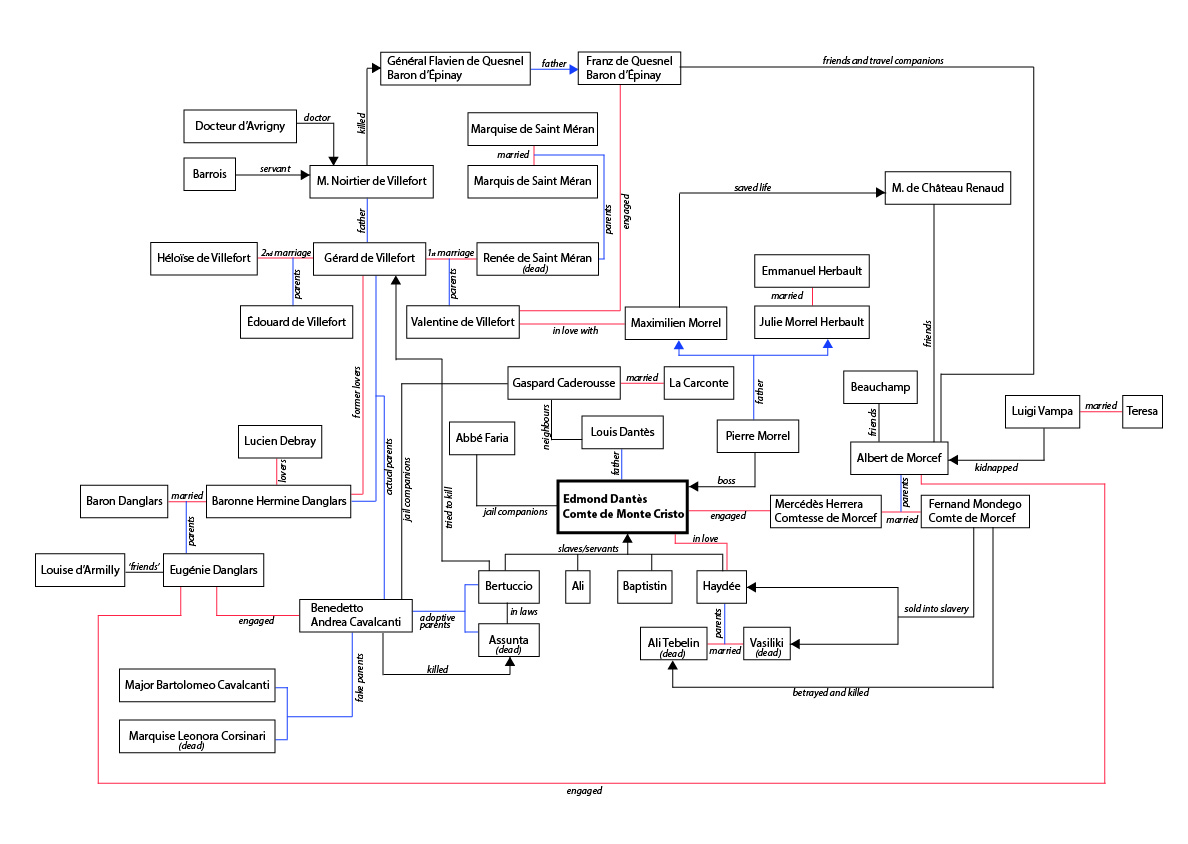