In light of everything that’s going on in my life at the moment, I’ll be taking a (brief) hiatus. I expect to be back within the week, but I won’t give any dates as I don’t know how long it’ll take for things to calm down.

So, instead of a review as I normally do on Wednesdays, I’m going to say a bit about my cat.

There’s always a cat in my family. Usually at least two. We’ve lost some, sure. But this decade, as far as pets are concerned, has been met with bearable goodbyes. Many pets have moved and changed owners. For the past ten years, (minus a few since he was a few years old when we moved into the house), we’ve had a ragdoll named Oliver. If you know anything about ragdolls, you’ll know that they don’t care about anything. He was never afraid of new people, and you could even pick him up if you wanted to. He didn’t care. My favorite thing to do with him was to cradle him like a baby, belly side up. It was pretty adorable.

He was pretty spoiled. He got cat treats multiple times a day (I never gave them to him, because he never stopped meowing when he wanted something and I didn’t want to encourage that behavior). He loved getting pets but he didn’t snuggle. He would never climb onto the bed or on your lap with you. Mostly he liked sleeping on the recliner, and that’s where he spent most of the time. That or being shooed out of my mom’s room, where he wasn’t allowed. One thing he loved doing was running to the front door whenever his favorite people got home. As my mom would say, he was a good dog. 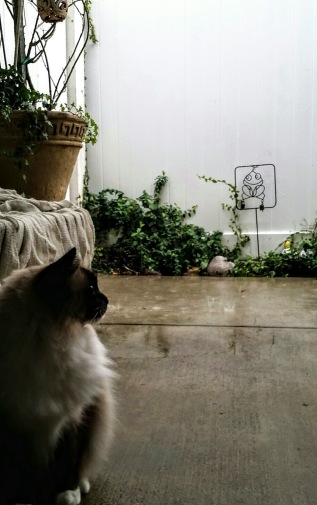 The weirdest thing about him was that Oliver loved the rain. Whenever it rained outside he would beg to be let out (even though he’s an indoor cat). He seemed to be happiest in the rain, and sometimes even begged to be let into the tub after you got out of the shower.

But a few weeks ago, it became apparent that he wasn’t okay. He stopped meowing, and became more reclusive. Soon he wasn’t eating very much, and started drinking unusual amounts of water.

He has kidney failure. It’s only going to be a matter of time if we don’t do it ourselves. We make sure to keep an eye on him to make him as comfortable as possible, but as far as we know, any breath could be his last. It’s harder than I could have imagined, watching this happen. It’s heartbreaking to see him wither from lack of nutrition. When you pet him now you feel bones more prominently than fur. As much as it pains me to see him go, I can’t imagine he wants to stay. P.S. We put him down this afternoon. It was clear that it was his time. Now that it’s over the healing process can truly start.

In my last post, I mentioned how I’m not an outwardly emotional person. Things really don’t make me sad. Being the speculative mind I am, I’ve often wondered how a situation like this (or even worse) will affect me when the inevitability of time takes its toll. Yesterday I was struck with something overwhelming, and I cried for the second time in multiple years.

I did not expect to be affected this much. He was a part of the family before I was. I’ve never been the one to regularly clean the litter box or feed him, and I almost never gave him treats. I have never considered him my cat. He peed on stuff and was pretty annoying because he never stopped meowing when he wanted something, even if it was just some head scratches.

But this post is the single most difficult thing I’ve ever written. I’m not exaggerating when I say I could have more easily written a third book than this. This is the first thing I’ve ever written that has made me too overwhelmed to continue. All that said, this song (link below) makes me cry literally every time I listen to it. It’s such a beautiful song, but since I can bring tears to my eyes just thinking about it, you can probably imagine it’s too painful to listen to regularly.

But, tears can be cathartic.

2 thoughts on “In Memoriam.”