So I’ve made a few personal discoveries lately about how I sleep and whatnot, and I think learning more about the process of sleeping can probably help the general populace understand their own sleep cycle a little better. It’s pretty basic stuff, but I think even being aware of it can improve the quality of sleep for some people.

First things first, most people probably know that we sleep in cycles. We go from what is called “Stage 1” and “Stage 2”, all the way to “Stage 4” and back up through the stages and into “REM sleep”, which stands for Rapid Eye Movement. This is the deepest sleep and all sorts of weird things happen during REM, but I won’t get into that. After REM, you go back down the stages until you’re back to “Stage 4”, where it goes back up soon afterwards. I imagine it a lot like mammals swimming at various ocean depths until they come back up for air. A cycle that starts and ends at Stage 1 on average lasts about ninety minutes (up to two hours) in adults. A “full” night’s sleep would be about five to six cycles, which translates to seven and a half hours for the average person.

But here’s where the important stuff comes in. I used to think (along with a lot of people, I would guess) that your body wakes up around the same time every day simply because you have a schedule that you stick to (like waking up for school). Now, I’m not so sure. I think it’s actually because of a few criteria being met. Your eyes naturally wake up more with the sun, so if the suns up you’re more likely to wake up. If you’ve gotten enough sleep (say, at least five cycles) that’s another check. Lastly, is that cycle ending? Very rarely will you ever wake up autonomously during REM sleep (which is how sleep paralysis happens), because that’s the “deepest” sleep. During Stage 1, you’re practically awake, so if you have enough sleep and the sun’s up, your body’s going to let you know that.

Lastly, we all fall asleep at different rates. It’s important to know how long it takes you to fall asleep under certain conditions in order to calculate a better sleep. It takes the average person about fifteen minutes, but if you’re super tired it can be shorter, or if there’s outside stimulus (or if you were pouring artificial light into your eyes immediately before trying to sleep) it could be harder to shut down.

So in order to calculate when you should be going to bed, all you have to do is count backwards. When you know you have to be at work by nine tomorrow and it takes you an hour to get ready and leave on time, you know you’ll need to wake up at around eight. Giving yourself a full night’s sleep of six cycles, that means you want to fall asleep at around 12:30 am. If it takes you longer than most people to fall asleep, say, half an hour, go to bed at midnight and you should naturally wake up when you want to (though of course alarms are a good backup).

I find that I personally fall into all the averages here. It takes me fifteen minutes to fall asleep and my sleep cycles are about ninety minutes long. If I didn’t get five cycles that night, I’ll be really tired and probably at least want to take a power nap for an hour and a half (to scoot that fifth cycle in that day). 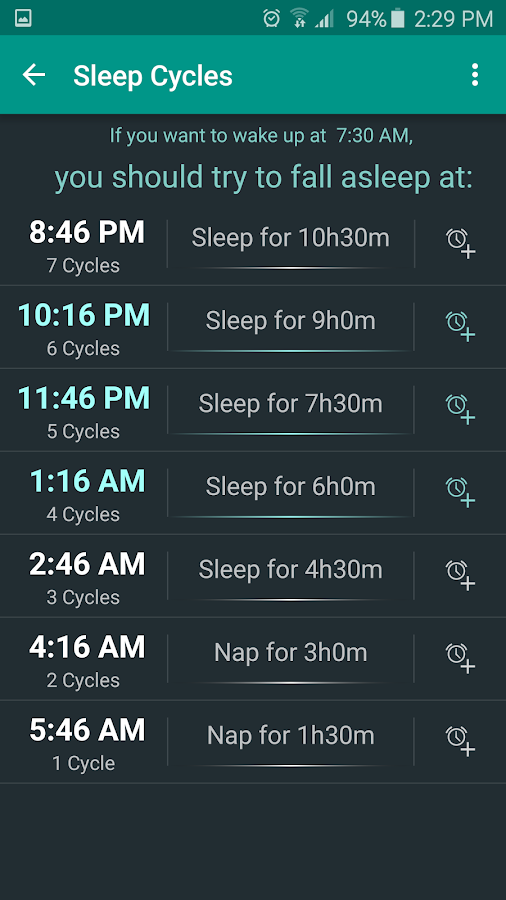 I’m not saying that all these numbers will fit perfectly for you. But if you set an alarm every day and go to bed at a time that doesn’t line up with that ninety-ish minute cycle, then you’re going to wake up exhausted. Don’t do that to yourself. At least take the time to humor me and go to bed earlier (heck, even later) one night. It’s better to get less sleep and wake up at the end of a cycle than get an extra forty minutes and wake up during one.
Also, if you don’t know how numbers work, there’s this awesome Sleep Calculator (there’s also a phone app) that simply tells you “When should I go to bed if I want to wake up at ___?” or “When should I wake up if I go to bed now?” and a few other options. It’s pretty nifty. Go check it out.

One thought on “Life — Sleep”