Night had fallen by the time Tasuneke returned to his village. With an armful of coal nuts and Tulu on his shoulder, he strode through the vine threshold with confidence. Two of the Tenders were standing watch at each side, one male and one female, trim-blades sheathed and countenances amiable as they saw him.
“And he returns with bounty in tow!” the man, Kuruk, applauded.
“He bears the gait of a man now, brother,” the girl said, smiling. Her name was Winona.
“Indeed,” Kuruk nodded. “He’ll be our peer next time we see him.”
Tasuneke couldn’t help but blush under their scrutiny. But then he remembered blushing wasn’t masculine, so instead he kept walking straight and nodded a quick “Happy Dawn of Night” as he passed. By tradition, returning from the forest successful made you a man, but the ceremony took place for formality’s sake.
Down the main path of the village, he could see the dark silhouette of the Temple of Whispers, where the ceremony would take place. Moonlight shone through the vines down the path, twisting shadows outlining the huts and fields beyond. Torches were lit along the path, as well, with long poles carved into decorative patterns that danced in the flickering light of the fire. News spread quick of Tasuneke’s return, and the plaza in front of the Temple soon filled with townsolk, crowding ahead of the ring of torches.
As he approached, the outline of his mother appeared at the foot of the Temple, standing next to the village elder, Aranak, and behind the Brazier of Renewal. It sent chills down his spine to see the brazier filled with kindling. It would be his bonfire today.
This was the moment he had been waiting for all his life.

He stopped just as he entered the arc of townsfolk. With his mother and the elder ahead of him and the cold Brazier in between, everything stood still for a moment. As the murmurs died out, the playful flames of the surrounding torches became the only speaker among them, their nonsensical words snapping and growling at the boy. Soon he became worried that he had forgotten something. Was there a piece of the ceremony he had neglected to bring? Was he supposed to say the first words? What were the first words? Had he already condemned himself to embarrassment?
Just as he had begun to panic, Aranak spoke, staff in hand, with his wizened yet gruff tone. “We stand together to embrace the dawn of a new year, and to witness the rebirth of our kinsmen, Tasune, son of Serayla. Who now approaches the Brazier?”
“Tasune, son of Serayla,” Tasuneke replied.
“What burdens do you bring?”
“I bring with me the weight of my past,” he intoned.
“Do you come alone?”
“No, elder. Tulu, the faespawn guides my path.”
“Come forth, then.”
As Tasuneke approached, music began to play. Without turning, he heard the soft plucks of the harp open up the circle into the ceremony’s true beginning.
“The Dawn of Night brings a new year,” Aranak called to the crowd. “We embrace it now, under the guidance of our ancestors, the stars. Walker of Two Paths, King of the Forest, bring us wisdom in our journey through this life as we await to join you among the stars. Bring us also the power to invoke the rites of passage to our kinsmen. If he is worthy, give him the strength to bear the burdens of his past as he parts ways with them and becomes a new man. If he is not worthy, give him a peaceful journey on his way to you, and let his example not plague the minds and hearts of our people as we move forward.
“Tasune,” he addressed the boy.
“Yes, elder.” He stood, frozen, as if Cedrine would strike him down if he made any false moves.”
“Are you ready to face the rites of passage?”
Tasuneke nodded. “I am ready.”
Aranak stepped forward. “Your coal nuts,” he stated, hand outstretched. He placed them, one by one, in the elder’s palm, and one by one Aranak placed them on a small table near the unlit Brazier.
His mother unsheathed her trim-blade. Her countenance throughout had remained resolute. Tasuneke would have to be strong, so perhaps this was her way of encouraging him. Anyone that uttered any cry of pain during the process had to be executed. He had witnessed this dozens of times, and only once had he ever seen somebody fail. He was only a child then, but even he remembered the sorrow in everyone’s hearts that day.
Once the coal nuts were removed from his person, Aranak pulled the charm bracelet off, and Tulu leaped off Tasuneke’s shoulder to the ground below. He began pecking at the nuts to make them easier to open.
As everything was settled, his mother began to sign with the tune of the harp.
“Over gentle hills, under lofty trees
Under vines of shelter and stars of night
With days of old escaping in the breeze
And days to come arriving in moonlight”
She raised the sword to Tasuneke’s face, and her eyes were filled with every emotion from worry to praise to hope. He clenched his fist and tried desperately not to reveal any of his own fear. The song continued, and as she sang, the rest of the townspeople joined in.
“As our kinsmen brings forth his burden,” Aranak called. “Let him bear the marks of his identity upon his brow.” He cracked open one of the nuts as Serayla cut into him. It wasn’t a deep wound, but he felt his nails digging into his palms as he tried to hold still. Aranak 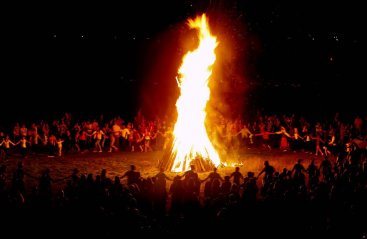 drove his staff into the ground and summoned up a gout of flame, setting the brazier alight with a sudden and intense heat. It roared into life, ready to feast on anything that drew too near. With one hand, Aranak placed a thumb into the open coal nut. When Tasuneke’s wound was complete, his mother stepped away. The elder pushed his stained thumb onto his forehead, the blood trailing down his nose serving as another suitable distraction for this new pain. He thought about how he would be forging his own blade soon, with the help of his mother. This pain would be forgotten by tomorrow morning.
“No longer will you be called Tasune the child of Serayla. I give to you the markings of a Tender. You will act as caretaker of our village. You will act as peacemaker for any troubles that may arise. You will act as a teacher for generations to come in Cedrian and Aluvalian custom. You are now called Tasuneke, Tender of Cedria. I bathe your brow in flame so that none may forget your new title.”
And with that, he pulled Tasuneke into the brazier, so close that he was afraid he may fall in. The fire consumed him with a new pain. Tears mixed with blood, only to fizzle away as they dripped from his chin into the inferno below. Eyes squeezed shut, he gathered all the willpower he could muster in remaining silent, for to cry out would mean death. Even through his eyelids he could see the flames dancing about, tasting his flesh. It was agonizing. Any longer and he would–
He was pulled from the Brazier, and he gasped at the fresh air. The heat still throbbed against his head, but it was at least bearable now. He touched a hand to his forehead. there was nothing to feel, of course, but he knew the dark markings of his identity would be there.
At that same moment, the earth shuddered. It felt as though the world itself had suddenly exhaled a long breath, heaving people forward and back. The gathering of people staggered, some even falling over. Tasuneke had managed to remain standing, as had Aranak, who was still grasping him by the neck.
The shaking stopped after a time, but somehow the discomfort intensified. Something malevolent had just transpired, and its air lingered.
“The King of the Forest has spoken!” somebody in the crowd yelled. “His scorn for the boy is clear!”
Tasuneke froze. What was that supposed to mean?
“He poses a threat!” another voice called. A woman standing plainly in the light of the bonfire.
“Now, now,” Aranak stated, addressing his people. “Let us not hasten to an unfavorable conclusion.”
“Aluvalian magic doesn’t belong here, elder! It’s unnatural and has corrupted our lands!” The crowd was growing restless now. Their apprehension had been turned to fear, and that fear had found a target.
“Hold on!” Serayla bellowed, taking position in front of Tasuneke. Her sword was still bare. “We have lived among you for generations! What grounds have you to blame the Tenders for the earth shaking?”
“It is the voice of Cedrine!” a man replied. “You would eat of his crops
and sleep on his land, yet cast aside his distress? Your blasphemy is no longer welcome here!”
Suddenly, Tasuneke realized that all of the Tenders in the crowd had somehow disappeared. Whether they had fled once the cloud of darkness encroached or he simply couldn’t see them behind the faces of anger and fear, he couldn’t tell. Whatever the case, he was scared now.
Were they right? Did Cedrine hate him? Cedria was the only home he had ever known. Rell certainly didn’t seem to hate him, but the man had also made it clear that he didn’t speak for the Archon. What was he?
“Tasuneke,” his mother said to him, voice low. Hearing his full name aloud for the first time filled him with a sense of pride, but it was quickly dispelled as he noticed her demeanor. She stood with her back to him, staring at the agitated townspeople, watching carefully for any threat.
“Yes, mother?”
“I’m afraid we are no longer welcome here.”
“But this is our home as much as it is theirs!” he protested.
“I know,” she replied, still calm. “You are a man now, and have the tattoos to prove it. I’m sorry, but I don’t think you’ll be able to forge your blade tonight.”
“So what do we do?”
“I think we–”
Just then, the talking and shouting was interrupted by an agonized wail, some distance away but definitely still in the village. The crowd once again fell silent.