Recently I’ve been adapting my interactions with others to help me learn about my personal energy levels. I’m still refining it, but I’ve narrowed it down to a rudimentary set of rules that dictate how much capacity of social interaction I have on any given day.

Interacting with others, as an introverted person, costs energy. It metaphorically drains my battery, and I simply cannot do it to often. I’ve arranged a lot of people I know onto a scale of zero to five points, zero being somebody that costs no energy to be with and five being somebody that is physically exhaustive to be around. It’s not perfect, but it has helped me understand why I will be in the mood to spend time with some people while wanting to stay home if others are involved.

As a frame of reference, having a conversation with somebody I went to school with but is not my friend would rate about a three on this scale. I’ll talk to them, but only because I feel I should. Somebody I am particularly close to or am simply comfortable around would probably scale as a one. I’ve never met anyone that would qualify as a zero for me, if such a person even exists.

On a daily basis, I probably ‘generate’ two points on this scale. I could spend time with somebody that I consider a two every day, but I won’t want to have any further social interactions. I can hold a reserve of about five points at any given time, so talking to somebody I don’t know and/or don’t like while automatically drain my energy. 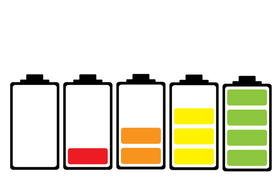 I’ve been running on zero for the last several days.

This system may sound strange, and indeed I don’t use it as often as I may seem to be implying, but it has its uses. It explains to me why I won’t mind going to school and/or the park as long as I don’t recognize anyone. I can walk around nonstop for hours, but as soon as I see somebody I’m not comfortable around I’ll have to avoid making eye contact lest I jeopardize my energy reserves.

This all could simply be my obsessive necessity to have everything neatly organized and categorized, but I realistically think other people could use this to. Going to a party could be a three or four on the scale, but depending on the people there it can raise or lower that number. This system gives me a way to explain to myself why I will like the notion of going out to eat with somebody, but when they bring somebody else suddenly I don’t want to go.

It could also explain why I’m a morning person and why I’m at my most relaxed when I’m home alone. The mere presence of family members around me ‘costs’ energy, even if I still have a net gain. I can’t get away from all social interactions, so I’m very rarely at full charge when I go about my day.

“Next time on Kollin is Really Weird… he discusses his aversion to odd and especially prime numbers and how he judges the worth of an individual!”