I’m a huge advocate for the fact that even tired plots and characters can be great when the right light is shed upon them. People like when a story blends something familiar with things that are unique, and I’d say the anime Log Horizon does that quite well. It’s the basic story premise of being “trapped in a virtual world”, but there’s quite a lot more to it than that. The story may be unoriginal (I can mention three other animes that have the same basic plot) but there is something about the characters and vibe that this one gives off that shines.

Most gamers worth their salt can reminisce about the glory days of World of Warcraft, where people adventured with their friends, joined guilds, forged lifelong friendships, and achieved names for themselves. I personally never attained that level of nostalgia for WoW, but I got close enough to it that I know how it feels. Log Horizon brings back fond memories of “the glory days” of that sort of gaming, but it also handles other questions of what exactly happens when the game becomes a reality in and off itself. The characters talk about what was, which is something that I can relate to, but the main purpose of the story is how they handle the new challenges they must face.

One of my favorite things about this show is the characters. The good guys all share a sense of ‘heroism’ that makes you really want them to win, in a way that I can’t say I find with other things. Even with popular books and movies I read I don’t usually feel a desire to particularly want the protagonist to win. Usually it does, of course, but perhaps expecting it somewhat devalues the victory. But in Log Horizon, I want to see these guys achieve their dreams. The weird thing about that is that I’m not quite sure why. 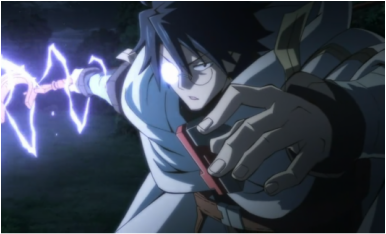 One theory I have is that I’m in love with the main character. I sometimes wonder whether people look at themselves in the mirror and dream to be somebody else. That sounds stupid, but think about it. I want to be a writer, sure, but I can’t really “envision” myself being one. All I think about is an older me. That’s pretty much because the person I wish I could be is literally impossible. If I could do anything my heart desired, I would be a wizard. I love the idea of casting fireballs and going invisible and all that. (I guess that’s not surprising because I write epic fantasy.) I would want to live in a magical world where I could explore and adventure, having some revered title that everybody knew. I also see myself as something of a leader, which is probably as expected, as well. In short, this is exactly who the main character is. Any time I see him I’m like “Yeah, that’s who I wish I could be.” Which is probably why I want to see him win so badly.

So, biases aside, Log Horizon is very well made. If you’ve played a huge MMORPG, this will give you flashbacks and bring back fond memories for sure. I’ve also heard from multiple credible sources that this is by and large way better than Sword Art Online, which is a really popular anime with a similar premise. I have not seen it, but as I said, trustworthy sources have provided this information.

P.S. There’s a guy who is a cat. He makes cat puns. He is my second favorite.