As far as card games go, they can be pretty daunting. It’s for good reason, too. Most of them have thousands of cards with a dozen different mechanics. It’s always frustrating to look at a card that has a paragraph of information, and if you draw that card while in the middle of the game you’ll be pressured to ignore it for the sake of the brevity of your turn.

I’ve played quite a few card games in my time: Magic: The Gathering, World of Warcraft TCG, Hex: Shards of Fate, Yu-Gi-Oh. You name it. I’m no veteran by any stretch of the imagination, but I have varying amounts of hours crafting decks and strategizing in all of these things. By far, my favorite has been one of Blizzard Entertainment’s latest installments, Hearthstone.

Hearthstone is quite a bit different from other card games in that it is extraordinarily simpler than most of its competitors. In virtually all card games, you have a limit on the number of cards you can have in one deck. The usual number is four. There’s also a deck size limit, mana cards, and exceptions to all of these rules. In a game like Magic you have to figure out how large you want your deck to be and calculate what percentages of what cards should go into it to make it viable.

Hearthstone is different because its kept simple. You can only have two of any one card, and all decks have exactly thirty cards.There are ratios, of course, but they aren’t things any new player would have to worry about. You don’t really have to worry about rules, because in an online card game, you’ll play a card and whatever happens because of it will happen, because its already programmed into the game. You won’t have to look up the rules of “What happens in X super specific scenario, where two cards seem to contradict each other” because the game will tell you as soon as it happens. 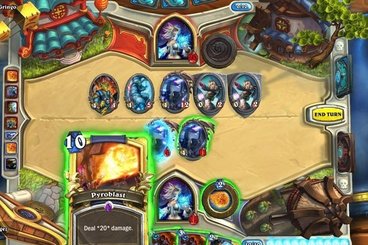 Another great thing that Hearthstone does is that on your turn, everything is within your power. Your opponent cannot play cards to “cancel out” anything you do. So, if you’re so inclined, you can get up to go to the bathroom while your opponent makes his moves, though it is a better idea not to do that if you’re playing to win.

The thing that I like the least about card games, and Hearthstone is no exception, is that at high level play, it is all about playing the meta. At a high enough level, both players have a good idea of what is in each other’s hands hands, if for no other reason than the fact that no decks are unique, and skilled players will know what cards are good in what decks. It becomes less about skill at that point and more about chance of what cards you draw and what random effects that happen as stated by the cards that are played.

So, if any card game is open to people that don’t play them, Hearthstone is. I’ve always felt excluded from the card game community because I’m not willing to put forth hundreds or thousands of dollars to rack up thousands upon thousands of cards, but in Hearthstone you don’t need to. You can have fun anyway.