It’s been quite a long time since Marvel made a bad movie. It’s not to say that they haven’t in the past, but let me just say how awesome it is that they’re continuously producing a great series based on an interesting story. While this movie doesn’t have any immediate connection to the Infinity Wars, it still gives us superheroes doing their thing the way they should.

First off, Civil War probably wasn’t everybody’s favorite movie. But it was mine. My favorite thing in every story (books, movies, whatever medium you pick) is when, halfway through the story, our main characters lose. Basically, I would have loved it if say, Voldemort definitively won in The Goblet of Fire. Yeah, you’ll tell me that he did win with all that happened (without mentioning spoilers), but I think it would have been better if Harry had lost more than he actually did. This is the middle of the story, for crying out loud. It’s the beginning of the second half. Our characters have probably had some impressive victories at this point, so it’s time to shut them down and force them to start building up from the top again. 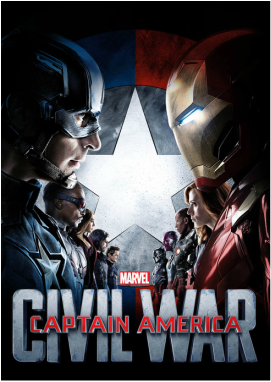 In a way, that’s what Civil War does. Obviously, the foundation that our heroes have built has gotten a bit shaky. In previous movies, when they beat the “big bad guy”, I’m not particularly interested in what happens next. The story is over as far as I’m concerned. But in today’s world the mass population wouldn’t be satisfied with a sad ending (unless that’s the point). So since I know this isn’t the last movie in this series, this is the most excited I’ve been to continue it.

I think it’s probably pretty important to note that I have never seen Captain America: Winter Soldier or Ant-Man. Or Agents of S.H.I.E.L.D. for that matter. So there were a few bumps in the road where I wasn’t quite sure what was going on, but I was relatively on board with everything that was happening. After having seen it, I’m even less interested in watching Winter Soldier, since I can guess pretty well all the things that happened (especially since this is literally a sequel to that movie), but now I really want to go see Ant-Man. I didn’t expect Paul Rudd to be as entertaining as he was. As small a role as he played in that movie, he still managed to take the bearer of “Favorite Line”. Also Spiderman is good, too! Honestly I don’t want another Spiderman movie, because come on, America has had enough, but he did a good job with what he was given.

So, when compared to Batman V Superman, this movie is leagues ahead. I will admit Marvel did have an advantage, having far more heroes to draw from, but at the same time they earned that advantage. They made it this far because they’ve been doing well for years now. One day I hope DC finds its footing, but man it doesn’t look like that will happen any time soon.