Of any anime or manga I’ve ever watched, the one I would most comfortably recommend to virtually anyone is Fullmetal Alchemist. It’s different from a lot of anime (if you’re going to take that route) in the fact that its longer than a lot of those one season shows that are twenty-three episodes, yet it isn’t as much of a time sink as Naruto, Bleach, One Piece, etc. To me, twenty-three episodes isn’t quite enough to get really attached to the characters, and hundreds of episodes is just way too long. I know for a fact that even though Naruto is my favorite anime of all time, I would not watch it now if I hadn’t already merely because I wouldn’t want to devote as much of my life as would be required to it. If you don’t mind spending the dozens of hours to get into it, then that’s your prerogative, but any more than a hundred episodes is just way too long to entertain the idea of watching it.

So, Fullmetal Alchemist: Brotherhood (don’t watch the original) is a healthy balance of a meaty chunk of character and story, yet short enough to be kept (relatively) simple. It can go off track a little bit, but it doesn’t ever veer off too far to not be relevant to the main story. It’s got plenty of characters, but they are all part of a greater whole. They all have their wants and needs, and the story has time to settle a lot of them one way or another, but it has a great habit of maintaining relevance.’ 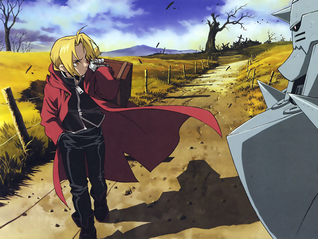 Another great thing about Fullmetal Alchemist is that the story expands in a very natural way. The main characters work for the government, and it starts off with them handling some small time criminal. Except that the criminal seems to know something. He has a clue! And so our heroes are lead by the trail of footprints until suddenly a nuclear bomb is going off in the city. (Not really, but you get the idea.) As the tale goes on and the characters can handle more, the plot challenges what they can really deal with. This isn’t like Dragonball or Gurren Lagann or anything where the characters get exponentially stronger, but they do mature quite a bit, and while I am a huge fan of exponential power-ups, it isn’t always the right choice for the narrative.

Fullmetal Alchemist also has two of my favorite things: logical magic, and plot twists. Alchemy is obviously very important to the story, and it hammers into your brain that there are rules that everything needs to follow. The law of equivalent exchange is something that anyone who has watched the series can bring up, and it heeds to it quite well. No, I won’t pretend that everything is explained with science, but with the suspension of disbelief we can easily assume that the things that are achieved in the show are ‘possible’. Plot twists, on another hand, are things that played out exceptionally well in this series. If you’re a sleuth, or simply have a lot of anime experience, (well, for one, you probably would have already seen Fullmetal Alchemist), you may be able to predict what’s going on with a lot of the shrouded mysteries. I certainly am not, so when certain things were revealed to me I was quite impressed.

So, overall, this is probably the “best” anime I’ve seen. It handles everything very well, and messes with your emotions with an expert touch. It has some of the saddest scenes I’ve ever experienced in all of movies, books, tv shows, you name it. It is soul-crushingly sad in some parts. Your soul will be crushed. But you will keep watching because you want more.