So, I was a little stuck today because I didn’t know what to write about. I could easily talk about something I know, sure, like more animes I like or books I’ve read in the past, but part of the reason of the review section of my blog is for me to critique things I haven’t seen yet. Of course I say that, but in this case, no, this was not the first time I’ve seen Emperor’s New Groove. It was, however, the first time I’ve seen it in several years. Browsing Netflix I was looking for something interesting to watch, and I was stuck between this, Grease, and Saturday Night Fever. Since my brother joined me, I didn’t want to put him through  something I wasn’t sure he would like, and my knowledge tells me he wouldn’t have liked the two latter. So those will be for another day.

So, I would say this movie is pretty underrated. You don’t hear about it very often (except to see it referenced a lot in the “When X happens just right” meme I personally see almost daily on Imgur). The movie itself is brought up occasionally, but mostly when people talk about Disney they’re referring to Disney princess movies or Mickey and friends and whatnot. Those are good staples, I would say, but as monstrously large a corporation Disney is, it still does things right most of the time. Disney knows what’s up. 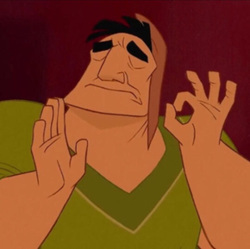 But the truth is, this movie is almost flawless. There are a few logistical problems in some scenes and even scene to scene, but there is nothing a child wouldn’t like about this movie, and nothing I can realistically complain about. I could say that when Kuzco gets turned into a llama over about twenty seconds, but later on in the film when a character drinks a potion, they change into that thing instantly. But I mean, what child would even pick up on that?

This movie is great because it handles quite a lot, but it does a great job holding everything up. It has a moral, it has adventure, it has lots of humor (duh), and most of the time it handles things very consistently. Sometimes, when something impossible happens, the characters address it and in a way break the fourth wall by calling attention to the fact that it happened. As somebody that has a habit of calling out inconsistencies and whatnot in movie theaters (it’s a bad habit, I know, I hate it), it’s really amusing to say “Hey, how did that happen?” and have the characters in the movie immediately say “Well, that happened, I guess.” It’s pretty vindicating to see that my commentary isn’t (completely) useless.

From what I remember of the sequel Kronk’s New Groove, I think that one’s pretty good too. It isn’t on the same level as this movie, of course, but still great. It’s important that every child in the first world experiences this movie. Their lives will be marginally improved by it.