I’ll preface this by saying I don’t normally spend a whole lot of time with games that don’t really have any action. The only game I can think of that I could go back to and start playing that didn’t really have combat or fast-paced movement is the original Animal Crossing for the GameCube. My favorite thing is role-playing. I love leveling up and finding a new sword to beat new guys with, because I like the sense of growth and accomplishment from going back later and stomping on the guys that were giving me trouble in the past. 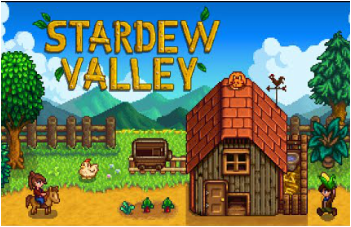 So, Stardew Valley is a little different. I’ve heard that it’s a spiritual successor to Harvest Moon, but I haven’t played it and I know virtually nothing about it, so I couldn’t say. The game is a lot like Animal Crossing, though. You live in a town with a bunch of other people and, basically, you do what you want. You can make the biggest, most impressive farm that ever was. You can go fishing. You can make friends and fall in love with the townspeople. You can go into the mine and find gems and fight monsters. It’s so well paced that you want to do everything, but there literally isn’t enough time in the game day to do that. You’re just supposed to pick what sounds like the most fun and go for it.

There isn’t (at least to my knowledge) some evil monster you have to fight at the end of the game or anything along those lines. The progression that you get is from finding better tools, or getting closer to your neighbors, or building a better farm. The town is also in a state of disrepair, and if you want you can help with that, too.

My favorite thing about this game is that I am not pressured to do anything. This game makes me feel relaxed, and nothing else I do really does that except reading (but I’m notorious for falling asleep if I try to lay down and read, unfortunately). Writing doesn’t relax me, I use it more to get my gears turning and to expand my knowledge and understanding. None of the other games I play relax me, because most of them are competitive and combat based, usually on skill. If anything those contribute to my stress, I would say, but they’re still fun.

Stardew Valley is one of the best smaller games I’ve played in quite some time. And to my knowledge it was made by one guy over the course of four years. The coding, the writing, the music, everything. And if you don’t know a whole lot about games, let me tell you that that is no small feat.

So this game isn’t annoying like Farmville or addictive like Candy Crush (I guess? Never saw that myself) but it is great. It soothes your soul, man. I’d recommend picking it up, but be warned: I wouldn’t consider this game addictive, but it can have a strong pull that makes you want to come back to it soon!