Today I’m going to talk about Avatar: The Last Airbender. Now, for those of you who have already seen it, and, if you’re like me, grown up with it, let me hit you with a sad truth. This show first aired in February of 2005. Yeah, this series is over eleven years old. That was literally over half my life ago. I guess that’s a weird way to put it, but you get the point. I’ve grown up with this show. I wouldn’t hesitate to say that in my opinion, it is the best American made cartoon (anime?) ever made. 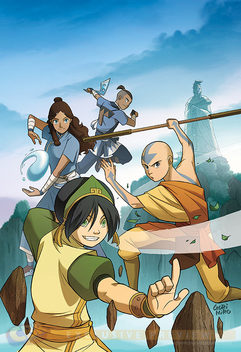 First, it is basically an anime for kids that is just as entertaining for adults. It is fun for all audiences, and I would say that’s hard to achieve in any form of media you’re going for. But It isn’t just that. This show, unlike most of the cartoons that are around (especially the ones at the time) has an overarching goal from the beginning: defeat the Fire Lord. As an audience we know that that’s where we’re going and it’ll (hopefully) end at that point. We have the destination. Second, we can’t do it yet. We may have the bad guy, but we have things to achieve first. We need to get Aang to learn all the elements, we need to save towns from the Fire Nation, and we need to make allies that’ll help us get to the Fire Lord in the first place. A few of those are subplots, but it stands to reason that those things will be done in an adventure such as this regardless.

So, let’s talk more about audience. First, it’s a bunch of goofy kids fighting evil. Kids will love that, second, these kids essentially have super powers and are traveling the world. I’d say that hits the teenager demographic pretty well, too. Last, as the series goes on, these kids start getting older, start dealing with more than physical obstacles: they fall in love, they fight wars, they fight their inner selves, they have to weigh morals. Older audiences will like that.

Another thing. This show does not get good. It starts good and gets great. From the beginning, it shows you that epicness will ensue, and it delivers. Everything about the whole show is great. I would almost say it can do no wrong. It is awesome, and all of the flaws that I’ve really seen in it are minute things that don’t even carry over to the next episode.

This show is a masterpiece. I literally know no person that has seen this show and doesn’t love it. It isn’t that I don’t know anybody that sees this in a negative light, it’s that everybody loves this show. This show, one so appropriately founded around the premise of ‘balance’, is the prime specimen of the combination of action, adventure, fantasy, comedy, and drama. I would probably be accurate in saying it was one of the best things that came out of my generation. In thirty more years it’ll still be good. It’ll be heralded as a classic cartoon and all that greatness.

So if you haven’t seen it, go pick it up. I implore you.