Every year since 2010, my brothers and I have gone to BlizzCon, the convention Blizzard holds of all their titles where they talk about whats next for each of their games, especially announcing cool things like expansions. 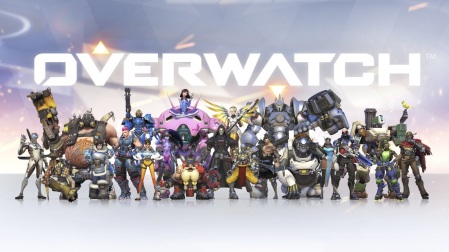 But in 2014, we knew something was going to be different. Each of us walked into the convention center knowing that Blizzard had something big they were going to announce. And they did. I remember Chris Metzen speaking in the opening ceremony hyping the whole audience up while stalling at the same time. I’ll link the reveal video. It was a lot of fun. So, they announced Overwatch, and it was at BlizzCon 2014 that the world got its first look at the game, because they had computers set up where people could actually just go and play the game they didn’t know existed twenty minutes before.

And it’s a lot of fun. It is basically an arena-based, superhero fps. You play with five other people against another team to attack and defend objectives, choosing across about two dozen different heroes and villains. They all have unique weapons and abilities, and its very fast paced. If you’re familiar with other games, its kind of like playing Team Fortress if every character in the game was a MOBA hero (League of Legends, DotA, Heroes of the Storm, etc.) All the characters have about three abilities they can use along with their normal weapon, which usually has two different attacks. It has a lot of strategy, and since there are so many heroes you can find one that fits your play-style pretty easy.

But more than that, you don’t have to unlock any characters. Ever. And when you’re done playing one person, or if this character doesn’t work with the strategy you’re going for, you can just switch out next time you die. You can play all 24 heroes in the same game if you try hard enough (though as I’ve found, the less you switch characters in a game, the better your chances of winning. Once is usually my limit.)

The game is a lot of fun. Its weakness right now is the fact that especially right now since its in closed beta, it doesn’t have balanced matchmaking. Everybody I’ve played against so far is a lot better than me, so its hard to really accomplish much. I also haven’t really had the chance to pick a favorite character, too, because I’m equally bad with all of them. Right now I’m stuck in between four different people. But it doesn’t matter so much when you’re standing in front of a turret reflecting every bullet with your sword and killing the turret because you’re literally a ninja.

The game will be released on May, 24th. Based on my understanding, the beta for it will also open on the 5th. Also, if you pre-order the game, you and a friend get access to the beta two days before that.

Basically, what I’m trying to say, is that if you’re a gamer and can handle fast paced shooters, you’ll like Overwatch.

For the Youtube video, skip to 27:50 for when they start hyping up for the reveal.