“Most of our unhappiness stems from the belief that our lives should be different than they are.” — Jamie Varon

I’m going to share a story that even most of my close family doesn’t know.

Let me start with the fact that I am not a vocal person. During a group assignment in class, I was the guy that worked alone and finished before everybody else, reading or doing homework from other classes in the room full of noise. When forced into a group, I usually take charge for the sole reason that I cannot handle people doing things poorly and ruining my grade. But I do not make friendships easily.

More accurately, perhaps, I should probably say that I don’t make friendships naturally. Of virtually every person I would call a friend today, I had to make a conscious decision to put them in that position in my life. If they were a stranger and I wanted them not to be, I would introduce myself and, to put it bluntly, force them to become my friend. If I don’t make that jump, a true friendship is almost certainly impossible.

So that’s how it started in my freshman year of high school. There was a girl in my first and last class every day. Upon seeing her face, I immediately wanted to get to know her. In all seriousness, I found her very attractive. Beyond that I had begun to feel detached from my group of middle school friends.

So, after months of planning, on Valentine’s Day, I sent her a school candy gram (or whatever they were called) with nothing more than my phone number on it. She didn’t know who sent it. So over the next few weeks we got to know each other (albeit anonymously for her). Being several years ago at this point, the details are getting a little fuzzy, but one day I decided to tell her both who I was and how “cool” I was at the same time. So on a sheet of paper I wrote a cipher using a written language I had invented. Once decoded, she would know who I was.

We started working in lab groups in science and I joined in with her friends in P.E. Over the next few years of high school, she became my best friend (though admittedly, I was probably never hers). I made it no secret that I was interested in her, but she was too nice to tell me that she did not (and probably woukd never) have feelings for me. Basically, since the answer she gave hadn’t ever explicitly been “no”, I held on to the hope that one day it would actually be a “yes”. I devoted a lot of my free time, money, and effort into making her birthday or Christmas presents, or consoling her when she was down, or making plans and hanging out with her friends. We got really close. I thought I’d have a chance.

But I didn’t. I started to lose hope. I became cynical. I still did nice things for her, but I eventually no longer even expected anything in return. I didn’t get much, so I’d like to say my lack of expectations made it so I wasn’t disappointed, but I was. My soul was crushed, in fact. I still couldn’t say why, but that girl has had an effect on me that will probably linger for the rest of my life.

I decided that if you have any feelings for somebody that has none for you, you should crush that hope. Destroy it entirely so that you can get over them as quickly as possible and move on. It’s what I wished I had done before it got as bad as it did.

But here’s the thing. Life is about learning from your mistakes. Though realistically my only fault was probably loving somebody that didn’t deserve it, to this day I consider not attracting her my biggest failure in life. I told myself, “If four years of all my love and energy towards being the best I can be isn’t enough, nothing will ever be.”

But that’s stupid. I did my best, but it just wasn’t going to happen from the start. I could mull over every action I took and wonder how I could have done things better, but it doesn’t matter. The alternate realities in which she cared for me is not the reality I should be concerned with. Sometimes the best you can be just isn’t good enough, but the history books will still say that you tried. In the end, having taken that step to achieve is sometimes more important than the accomplishment. I used to regret ever having met her, but though I still (unfortunately) have a negative opinion for her, she doesn’t deserve it. It wasn’t her fault. She probably contributed more happiness than sorrow over the course of my high school career. It was I that gave myself the sorrow.

So my point is, I think that what happened to me was good. It may have been soul crushing, but I survived, didn’t I? Am I not a stronger person for having gotten through that dark time? Don’t let what should have or could have happened prevent you from trying your best tomorrow. Because you won’t fail every time, I promise. 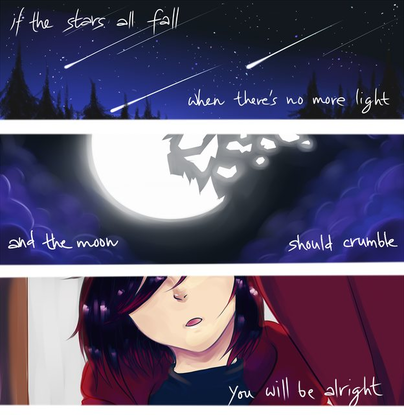 From RWBY, a show by Rooster Teeth.

So, as a result of that, I’m going to go against past me’s advice. I’m going to try again. The same exact thing may happen, but this time, even if it doesn’t work out, I refuse to let it destroy me. Am I scared? Heck yeah, but as they say, courage is not the absence of fear.

May your day shine bright.