In case you’re interested, here is the brief synopsis of the major events that occur in Nacre Then. Specifically, most of the detailed occurrences are in the continent called ‘Torreth’. Note that I will be describing the history as it is commonly believed, not necessarily as it actually happened! Don’t take it that I am explicitly lying to you, though. History may be written by its victors, but most everything you’ve learned in class is composed of half-truths at worst.

Before time began, Nacre Then had a period known as “The Was”. It was before everything. A time with no beginning or end, and its sole inhabitants were the Primordials. They were an ancient race of godlike beings of near omnipotence. The belief is that they either created by God, or came even before God. In either case, God frowned upon their power, be it of fear or disdain, and sundered the race apart, tearing them into the four sentient races of the common time, beginning with the First Era.

All creatures of any relevance can use magic. Every race gets their powers from a different “shared” pool, be it the moon, the planet, or the air itself. The humans get their magic from the stars. A large portion of this power comes from seven specific stars that each shine with a brilliance that can sometimes rival the moon, depending on the phase. In the First Era, two of each race were put on the two main continents: Torreth and Ithalin. (Ithalin is subject to change, as I literally haven’t named it until just now.)

As people tend to do, the world wasn’t big enough for the four of them. The humans found themselves pitted against the Al’Tari, a draconic people of unrivaled intellect. The Al’Tari draw their magic from the moon, and a rare natural occurrence (sort of like a comet) gave them immense power, and they soon defeated the humans and enslaved them. Under this same power, they cursed all humans so that they could no longer use their magic.

Then, a hero rose: Autlan. He was an inspiration to his people, and they took up arms against their slavers. Soon they swept over the Al’Tarin Empire like a rising tide, and their perseverance gave rise to the Autlan Empire, or the Crown Empire. After defeating the Al’Tari, Autlan drove them into extinction, beginning the Second Era: The Era of the Empire.

In the sense of major world-changing events, there is little that happens in the Second Era. No emperor was as righteous and loved as Autlan, and eventually the Empire was driven into corruption. They established the Warstorm, a national tournament that killed thousands to keep the population in check. Eventually an emperor began a court of wizened historians to discover a way to break the lingering Al’Tarin curse. They succeeded, and the power they unleashed threw Torreth into the Third Era.

They were called the Archons. Since magic is given threw a finite pool, seven people containing the entire power of the stars turned them into forces of nature. They soon began the Archon War, a conflict that lasted nearly two decades. This was a power struggle as well as a war for land claims. They broke from the Empire, and, not having any magic to combat them, seceded half of Torreth to the Archons. At the end of the war, a combined effort of three Archons shattered the continent, creating the Xal Deer Sea and ending the war.

After the Archon War, the Third Era would be described as the time of unmatched magical proficiency. It was in this time that humans had the best grasp of what magic could really do. It was Torreth’s Golden Age.

Then, the Rupture happened. One day, the world shook with an extraordinary power never before witnessed. The explosion’s epicenter was Veritia, and it wiped out the entire nation. The sky tore apart, leaving a permanent rift in the sky that terrified the people. Magic was blamed as the cause for this disaster, and thus was banned nationwide. The Fourth Era had begun.

The Fourth Era is a tumultuous time of strife. Nations once again war with each other, and darker evils return in Torreth’s time of weakness.

As of yet, that’s as far as the timeline goes.

This is the brief history. In a normal conversation, I would be going off on dozens of tangents about other things that happened in the First and Second Eras and in all probability never finish my story. This is my passion. This is the world I’ve spent years expanding. And, though this brief synopsis doesn’t really do it much justice, it’s pretty dang big. I hope you found it interesting. Literally nothing makes me happier than talking about my universe to somebody that has genuine interest in it.

I don’t expect to be talking about it much, though, as all the information I would talk about would be summations of things you can read up on in The Archive. Heck it has a timeline there, too. And in this synopsis I deliberately refrained from describing details that could end up being huge plot twists if these stories do turn into book series. For example, the Timeline in The Archive describes how the Rupture happened, even though if I wrote Sorik’s story the reader certainly wouldn’t know what happened until much later. So if you do want to read The Archive and actually expect my universe to turn into full length novels, read the sections about the nations, the fauna, or the characters if you’re so inclined. The timeline is certainly the most dangerous one to read if you’re scared of spoilers.

And with that I will close. I have the day off today, a rare circumstance for a Sunday. As a result, I hope your day shines as bright as it looks like mine is going to. And if it doesn’t, try to make it bright! Good luck.

“The true secret of happiness lies in taking a genuine interest in all the details of daily life.” — William Morris 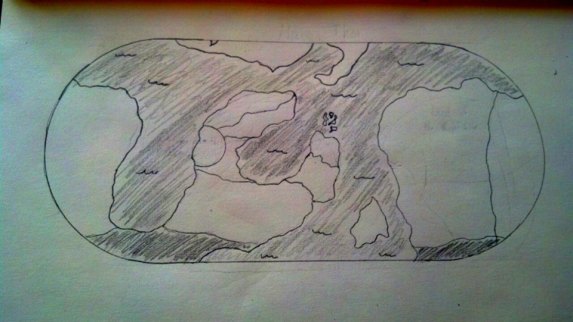